Marine Alliance for Science and Technology for Scotland

Marine science is largely underpinned by technology which is driven and sculpted by mutual interactions between scientists and engineers. We currently live in an era where technology is available to access, explore and sample the marine environment in its entirety.

Paradoxically these capabilities have arisen at a time, where in the midst of a changing climate, funding in which to provide the pertinent high-resolution and high-replication of measurements and samples is becoming ever more challenging. Therefore, the current emphasis is not on technological capability but rather technological innovation in which to overcome these challenges. Through this new forum, the MASTS community has the potential to exploit a wealth of expertise in marine technology innovation though cohesion of its well established and internationally renowned groups, which in turn will ensure a healthy and pro-active future for MASTS. 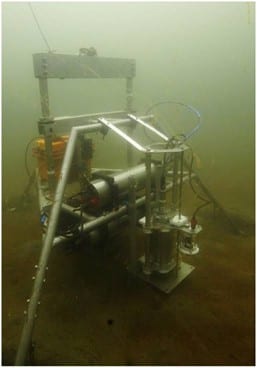 This forum will actively engage the engineers and technologists embedded within MASTS, and will aspire to forge a multi-institute coherence with a regular transfer of knowledge exchange, evaluation of current expertise and capabilities, and horizon scanning. The forum will facilitate networking and information exchange by convening meetings and workshops to establish a coordinated approach to proactive engagement within MASTS. The forum will engage in both the support and enhancement of marine science in Scotland, as well as collaborative technology-based pursuits. It will also secure appropriate scientific representation on strategically important bodies, and engage with other research themes, forums, and key stakeholders to ensure useful feedback and contribution to the MASTS community. The overarching philosophy of MASTS is to ensure a healthy and pro-active engagement between scientists and technologist.

Lars Boehme is interested in mesoscale dynamics of Polar Oceans utilizing animal-borne technology. He is involved in a range of international and inter-disciplinary programs, e.g. the International Thwaites Glacier Collaboration (https://thwaitesglacier.org/). His studies also highlight the benefits to the sensor-carrying animals themselves by showing the usefulness of this approach in examining the sensitivity of top predators to global and regional-scale climate variability. He is generally interested in low-cost technologies within the Ocean Observing System.

David McKee works on development and use of optical sensors to study marine light fields for remote sensing and primary productivity applications, and to characterise materials impacting on optical water quality. His interests range from single particle analysis (imaging and flow cytometry), through bulk optical properties (absorption, scattering and fluorescence) to basin scale observations using ocean colour satellites. The work involves development of new sensors, new measurement protocols, understanding measurement uncertainties and their impact on derived parameters, and both forward and inverse modelling of relationships between optical and biogeochemical properties.

As Head of the BGS Marine Operations group since 2018. Oliver Peppe is responsible for the operation and development of BGS’ marine sampling and survey equipment. An electronics engineer by background, he has become a multi-disciplinary systems engineer and project manager during 20 years of experience in the development of innovative technology, largely for marine applications. He spent 9 years at Petroleum Geo-Services (originally MTEM Ltd.) working on the development of electromagnetic survey systems, culminating in his role as Department Manager for Electromagnetic Technology based in Oslo. Before this he was at the Scottish Association of Marine Science where he worked on the development of early marine autonomous systems including deep-sea landers and oceanographic and sea-ice drifting buoys. He has been involved in many offshore projects across the globe, both scientific and commercial, including research cruises to both the Arctic and Antarctic Oceans.

Estelle Dumont is the head of the Marine Robotics technical team at SAMS and the manager of the Scottish Marine Robotics Facility. She has experience with a range of UUVs including Seagliders, Slocums, Remus and Gavia. Her work also includes other physical oceanography instrumentation (moorings and ship-based), and includes maintenance, deployment and data processing. Estelle regularly participates in research cruises, particularly in the North Atlantic and Arctic regions.

MASTS was founded in 2009 to be a unique collaboration between marine research organisations, government and industry.

We’re working behind the scenes to bring you a suite of useful, and updateable, resources including:

If you would like to be updated when the resources section is live please let us know.